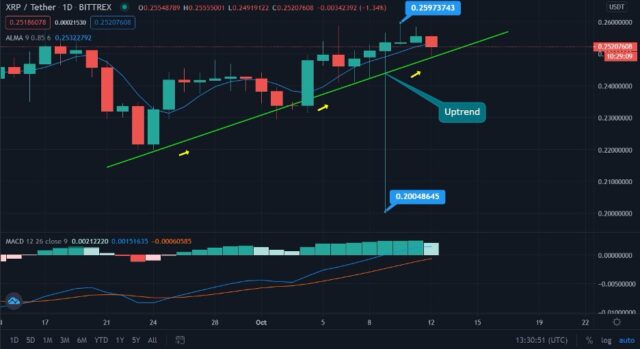 Cryptocurrencies are gaining traction as Bitcoin returned from its drop in January 2018. Bitcoin is currently at its highest value, so more people are looking to invest in blockchain-based technology. However, Bitcoin may be too intimidating for new investors, and most experts would recommend going for altcoins.

Companies like PT Unified Indonesia have been evaluating the different altcoins currently in selection. One of the most notable coins is the XRP from Ripple, which acts as a payment processing service. Before talking about the predicted trends in 2021, let’s start by talking about XRP.

In 2013, banks expressed interest in using their system. On December 29, 2017, before Bitcoin’s decline in 2018, Ripple’s XRP momentarily shifted as the second-largest cryptocurrency, with a $73-billion market capitalization.

By 2018, over a hundred banks have signed up using Ripple’s XCurrent messaging technology. The Society for Worldwide Interbank Financial Telecommunication (SWIFT), one of the dominant global payment processing organizations, has pointed out that Ripple and other similar blockchain solutions have scalability and security issues.

Ripple’s XRP is one of the most well-known altcoins, and crypto experts wonder about its performance in 2021.

Here are some of the analyses from specialists:

XRP did well in 2020, especially in November. Things are looking up for this altcoin with Bitcoin’s rise. According to PT Unified Indonesia, XRP might reach $2 to $3 in 2021. While most crypto enthusiasts anticipate a bullish outlook, they predict that the coin will grow past $1. Some historical data and technical analysis are less confident.

Wallet Investor, an online forecasting platform, predicted that XRP would take a bearish stance. The platform predicts that XRP will start the year strong at $0.70 before dropping. The long-term price prediction states that the XRP value will expect an average value of $0.30 this year.

A website called Longforecast has a bearish XRP prediction, foretelling a value of $0.38 at the end of 2020 and closing at $0.26 in 2021. They expect the price to drop further to $0.08 by the end of 2023. While some are optimistic about Bitcoin gaining ground, many are still skeptical as to whether or not the altcoins like XRP will benefit from Bitcoin’s highest value in the longest time.

PT Unified Indonesia has predicted that 2021 is a good year for cryptocurrencies, with Bitcoin slowly getting its position as king. Other coins, such as XRP and Ethereum, are gaining value and attention. If you’re a novice investor, it’s best to be on the lookout for opportunities to ride rising waves. You may also look for a professional or expert to help you.

Benefits of Hiring an Entertainment Lawyer

Legal professionals in the field of entertainment law, such as John Branca, provide contra…